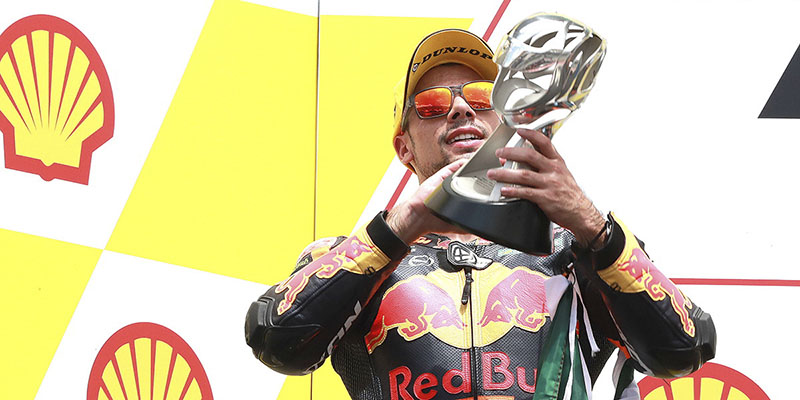 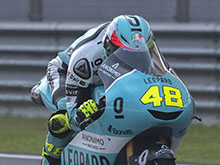 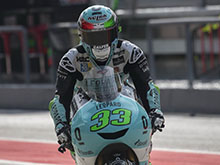 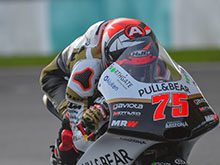 Moto3: Two Extreme Components riders in the podium.
This weekend the Motogp main competitions were held in the Malaysian Circuit of Sepang, the last of the overseas races.
The Leopard Racing rider Lorenzo Dalla Porta started from the 14th position and was able to reach the leading position in just a few laps. Battling for the whole race to stay close to the podium positions he took some ricks and thanks to an incredible last lap he was able to finish 2nd, recovering a total of more than ten places. His teammate Enea Bastianini started from the 6th position but didn’t manage to be quick in the chaotic battle of the first laps. Soon after his pace became faster and faster and eventually he was able to get the podium, finishing 3rd.
Fantastic race also for the Angel Nieto Team Rider Albert Arenas who once again fought for the victory since the first lap. At the end Albert missed the podium for just 0.038 seconds finishing 4th and continuing the positive line of results of the last races.
Top ten also for the RedBull KTM Ajo rider Darryn Binder who started 11th and led the race for some laps. Unfortunately in the second half of the competition he started to suffer for the tyre wear and so Darryn finished 7th, earning 9 points.
Unlucky race for both the Monlau Competition riders Aron Canet and Alonso Lopez that were forced to a premature end. Aron crashed with a few laps to go when he was first and was trying to build a little gap while Alonso was involved in a crash in the first laps.
Now the Moto3 Championship standing sees Albert Arenas 9th, Aron Canet 6th, Lorenzo Dalla Porta 5th and Enea Bastianini 4th, -74 points from the new World Champion Jorge Martin. 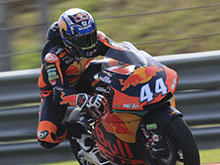 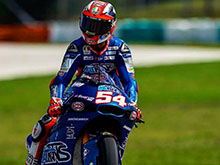 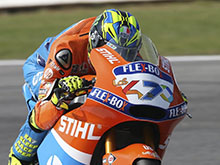 Moto2: Eleventh podium of the season for Oliveira.
The RedBull KTM Ajo rider Miguel Oliveira started from the 7th position and in the first corner was already in the 2nd place, thank to an amazing start. Miguel gave his best and pushed since the first lap to win the race and to keep his chance of winning the Championship open. Unfortunately after a great battle for the victory he finished 2nd and got the eleventh podium of the season. His teammate Brand Binder started from the 9th position and tried to comeback but the rear tyre spinned a lot on the acceleration and he lost some positions. To avoid the problem Brad changed the way he rode his bike and recovered what lost, finishing 8th and consolidating his place in the world standing.
Really positive race also for the Italtrans racing rider Mattia Pasini who started 5th and recovered one position in the first laps. At the end he tried to close the gap with the third but that was impossible and he finished 4th.
Fantastic comeback for the Pons Racing rider Lorenzo Baldassarri who started 13th and lap by lap gained positions. Lorenzo finished a complicated weekend with a 6th position, recovering seven places.
Now the Moto2 Championship standing sees Lorenzo Baldassarri 4th, Brad Binder 3rd and Miguel Oliveira 2nd at just 32 points from the new World Champion Francesco Bagnaia. 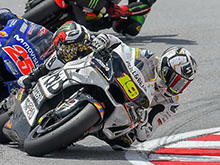 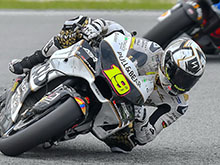 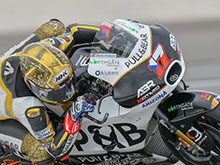 MotoGP: Bautista top independent Ducati rider.
The Angel Nieto Team rider Alvaro Bautista continued also in the Malaysian Circuit of Sepang his positive streak of results. The Spaniard for the fifth time in a row was able to pass the Q2 between the fastest rider and qualifying himself in the 9th position. In the race he had some difficulties for the low grip on his rear tyre but he managed the situation and pushed to gain places. At the end he finished 7th, the best Independent Ducati rider and just 4 second off the Ducati Factory of Dovizioso.
His Teammate Karel Abraham had an unlucky weekend. In the last Free Practice session he had a crash and so compromised the following QP session. Despite the pain he was able to finish the qualifying session in the 21st position. In the race after a positive start the bike stopped for an electric problem and Karel was forced to a premature end.

The next round will take place in the Spanish Circuit of Valencia on the 14th November, the last race of the season. Special thanks to teams and riders for the technical contribution in developing our products and the results they get on the track.